Dealing With Feedback: How to make the most of it?

HEY! Can you believe another week has passed since last Sunday’s Podcast??

I’m going to go straight in…. FEEDBACK, let’s be honest, it’s something we have all received in life at times when we have struggle to take note of feedback as not just being negativity.

We discuss this topic with our TWO guests this week: Elise and Bram (Artist name Oakfield Drive). Two incredibly talented and humble musicians, who didn’t even know each other until connecting through the Made On The Road community after George met up with them individually on his way through Europe (how cool!!)

This is ‘Time To Talk’

So why did we choose to focus on such a topic as feedback this week? Well, stick with us, we’re finding all the positives and uncovering how we, as creatives, take on feedback daily and spin it into progressing further with our creative careers.

What exactly is feedback? Have you ever sat and thought about what feedback is? Well, if we take it in it’s most basic form, feedback is the REAL thoughts and feelings of your audience. And when you are trying to make a living from your audience, you have to see them as clients, customers if you will. It is always the weirdest thing to me, to think of fans and followers of what we do here at Made On The Road, as people who feed the business and allow us to create and inspire on the road because I see so many of you as friends.

But the harsh reality is that anybody that discovers your creativity, has the potential to become a customer in some way shape or form. For those of you that are musicians, even a stream on Spotify equates to a tiny figure in cash!

So with this in mind, any expression anybody makes towards your work should be taken seriously (most of the time).

What feedback is worth listening to though?

There are 2 types of feedback. Constructive, and destructive:

Constructive – This is the good stuff. The gold dust amongst your community that will allow you to improve what you do to better suit your audience and have them REALLY on your side. It’s also the hardest feedback to receive, because it’s incredibly hard to actually get people to commit just 1 minute of their time to think about something meaningfully enough that they want to let you know how they truly feel. This IS customer feedback, the same way you would leave a review on TripAdvisor.

Destructive – Put simply, this is mostly jealousy expressed through hate commenting. Don’t listen to this. Unless there is something pointed out in particular that can clearly be looked into, these types of comments will mainly be focussing on something completely unrelated, and usually nothing to do with your work at all!! For example, I had a comment recently that focussed on me ‘moaning’ about not having any money when travelling with the bus…

The truth is, I have never made a video moaning about not having money on the bus, but I have made a video being very transparent about the finances of travelling with the bus… it’s up to me as to whether to act on how I approach the next video where I touch on finances, OR I can choose to ignore it because that follower must missed the point of the video… see what I mean? It could very quickly become destructive, and being aware of the difference is so important as a creator.

Something Bram picks up on in this podcast is how every creator gets negative feedback at some point. In fact, I hear a lot of people saying you haven’t made it until you get haters! But every single one of us on this week’s episode has dealt with it at some point, so if you are reading this after recently receiving some ugly feedback, don’t worry you aren’t on your own!
If you want to share your story with us in confidence that we will not publicise, we’d be happy to talk, get in touch via the contact form below.

This is ‘The News’

That’s right, you’re as blown away as us. Imagine 69 MILLION people turning up to your gig every month to listen to your music….. That’s PEOPLE not just amount of plays… Well, Ed Sheeran has just broken all streaming records on Spotify alone by reaching, 69 million monthly listeners, I mean that’s just silly! This shows just how powerful the world of streaming is. We’ve heard that 1 million streams equates to approximately £4.5k/5k …. So when you’re bringing in 69 million, that’s a big load of cash coming in as a revenue stream.

But this is not easy, we’ve recently released a song with Isaac Tyler called ‘I Need Your Love’ (Listen Here) and it’s been incredibly hard to get that listened to and playlisted. And then you find yourself with a track that has had amazing feedback, only receiving 600 streams or so… so it’s definitely a tough world to be in, but nice to know it’s paying when you’re hitting the streams!

‘SKINNY LIVING’ GET HACKED
Skinny Living are a fantastic Leeds based band, maybe you have heard of them? They have just released a fantastic new single called ‘My Blood’ and prior to the released they had their Facebook page hacked, with over 50,000 followers, and deleted! Luckily, we believe they have their page back now, but it’s scary to think this is possible to lose 50K fans and ‘customers’ with a few clicks of a button.

Luckily too, the Skinny Living boys do still have other social media pages, but it goes to show, don’t put all your eggs into one basket! – Wishing you all the best with the new single lads!

This is ‘Who Are We Listening To’?

Each week we share who we are listening to, you lucky bunch have 4 tracks to look up this week, get your notes ready:

George – Weslee – an artist he was introduced to by Elise and Bram!

Each week we get out our favourite pack of cards consisting of individual statements to use as a thinking point for the week ahead (bare with us here!), and since we had two guest on the podcast this week, that meant two cards!

Elise drew ‘Authenticity’ – we could not BELIEVE how much the last sentence matched this week’s podcast! 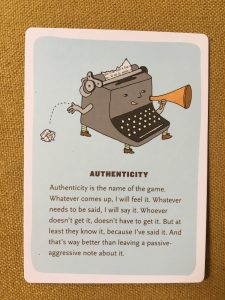 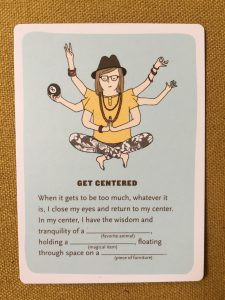 As ever we really do hope you’ve enjoy the podcast, and please reach out if you want to get involved – Isaac will be at the end of the email for any requests and or feedback (the irony)! – team@madeontheroad.co.uk

Stay safe, look after each other and remember, BE CREATIVE (only joking, podcast joke)….Never Stop Creating!